If you look at the pink newspapers, you’d think the budget looks like Christmas and Finance Minister Nirmala Sitharaman is Santa Claus. Each and his uncle want something for themselves, for their industry, for farmers, workers, the middle class and even for the stock market. Of course, it would be nice to have a low tax rate, say 20%, higher standard deductions and no capital gains, especially for stocks and the stock market. And yet, in all this clamor, no one is saying who will pay for some or all of these demands. Big problem.

The big problem is that while we all want, none of us want to pay. India has one of the lowest tax-to-GDP ratios (about 9-11% compared to 16.5% in Mexico; 23.1% in Turkey; 24% in the United States and much higher in Europe), the lowest percentage of taxpayers, and among the biggest black markets in the Group of 20. Black is back, big time, like it was before demonetization, and no one is trying to figure out where the government is getting the money for pay all the gifts we want from the government.

The tragedy is that while everyone knows how to fix India by spending, no one knows or focuses on where to find the money to fund these programs. As the Prime Minister laments, only 1.4 crore Indians pay income tax. That’s ONE PERCENT of the total population, or just over 1.5% of the adult population. And that’s not the end of the story; of these 1.4 crore, more than 70% – or 1 crore – declare an income of between Rs 5 and 10 lakh per annum. That is between Rs 42,000 and Rs 85,000 per month. If you believe this is the real India, you will believe anything.

The reality is that 20% of taxpayers account for 80% of income tax collected. There are only 3.2 lakh people declaring an income above Rs 50 lakh (Rs 4.2 lakh per month) and only 8,600 earning more than Rs 5 crore. Meanwhile, the Global Wealth Survey puts the number of Indians in the high net income category (net liquid wealth over $1 million) at 2 lakhs. Over 40,000 luxury cars sold every year before Covid but only 1 lakh earned over 1 crore. Where does the money come from?

The same story is true of India’s other big bang reform (demonetization the other) GST. He was supposed to be the government’s financial savior, with the government estimating 14% year-on-year growth. It hasn’t happened by a long shot and Covid may have been a factor over the last two years, but if you bought the 14% annual revenue growth, the monthly inflow should, after five years, have been close to Rs 2 lakh crore now. We are not near her; our best month was Rs 1.3 lakh crores.

Like income tax, the number of registered businesses is pitifully low. In a country that claims 5 crore of retail stores, only 1.23 crore of businesses are registered for GST. Second, even with the registered and paying population, only 6.5% of businesses, mainly limited companies (including PSUs) and large private companies, account for 72% of GST collection. GST. 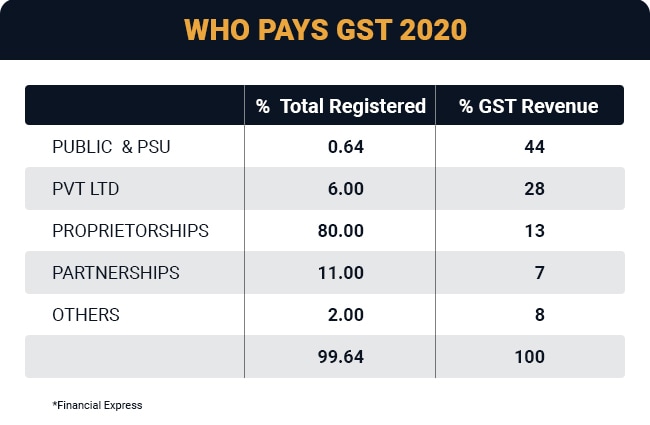 The GST should have helped increase the number of taxpayers, but because of politicians who kindly let small businesses (up to Rs 40 lakh turnover completely and Rs 2 crore marginally) out of reach, and bureaucrats who made the most complicated structure and compliances, no one wants to join the GST system. It is cheaper to pay inspectors than to register for GST.

The Finance Minister’s problems are compounded by the fact that almost 80% of his purchasing power is tied up in interest payments (45%), defense and salaries, so there is very little room for maneuver. In this framework, it must respond to populist electoral measures (an almost annual characteristic) as well as to capital infrastructures. The UP elections, as Home Minister Amit Shah says, will decide the future of India. We should expect more giveaways to voters there. Arun Jaitley’s donation of Rs 6,000 a year to farmers (PM Kisan Scheme) is costing the government more than Rs 60,000 crore. The Food and Fertilizer Subsidy, due to Covid, has seen an increase in food supply and distribution, and is likely to break the budgeted amount by almost 60%.

The good thing about the 2021-22 fiscal year was that revenue collected was buoyant. High gasoline excise duties provided a cushion to maintain the budget deficit at an approximate level of 6.8%. And with the decline in government spending on vaccinations, there will be a big saving there. (The government seems to have made it clear that it was not going to give “precautionary shots” to the bulk of the population, as Indian health experts, as yet unknown and unseen, do not believe it is necessary, although a lack of desire to spend more on vaccines seems to be the real reason.)

So, in addition to electoral benefits, the general consensus seems to be that the government will continue its approach to budgets by focusing on capital spending, privatization and targeted populist social spending. It may not seek to reduce the budget deficit too quickly, but it is unlikely to open the doors to tax cuts and increased exemptions for the few taxpayers there are.

In fact, after the legislative elections, there is a very good argument for the government to reconsider its reduction in excise duties on petrol/diesel made in November, as it is a fairer tax; even those who avoid paying all other taxes have to roll their vehicles. Although this may increase inflation, the government could consider reducing IT prices, especially by cutting processes, if it resorts to them. It would also buy him time to rationalize, to simplify the GST system — it absolutely has to be done — so that the GST really works as it was supposed to. Similarly, the Minister of Finance could provide additional incentives for taxpayers to adopt the non-exempt tax system he introduced last year.

(Ishwari Bajpai is a senior adviser at NDTV.)

Disclaimer: The opinions expressed in this article are the personal opinions of the author. The facts and opinions appearing in the article do not reflect the views of NDTV and NDTV assumes no responsibility or liability for them.

Good afternoon, A similar story to last week as we enter a new week with the pound opening today on the backside. Now trading in the 1.16′ and 1.22′ against the Euro and the Dollar respectively. Following last week’s pessimistic Bank of England outlook, the UK is potentially facing double-digit inflation and a recession through […]

A bitter outburst and a close pass from a nearby northeast

That’s a loaded forecast, so let’s dive into it! First things first: An arctic cold front, currently draped over the North Country, is opening the gates for another blast of bitter cold air to settle overhead. We have unfortunately already reached the maximum temperature on Friday and are heading back into the single digits by […]

The USDA has pursued a dangerous Trump-era program that will allow a number of pork processing plants to increase their “line” or “process” speeds. This means more animals will be slaughtered and prepared for human consumption per minute – to the detriment of worker and animal welfare. The added pressure on people working in slaughterhouses […]